Sub Terra Review — Can You Escape? 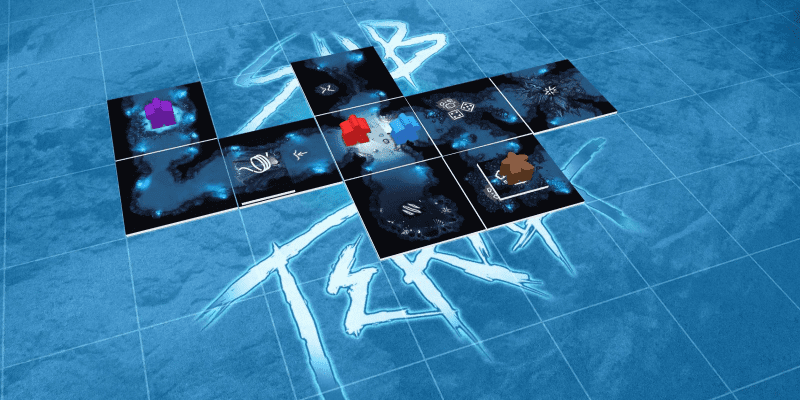 Sub Terra is a cooperative survival horror board game. You and up to five friends are cave explorers who have become trapped deep underground. You must quickly explore a tile-based cave system to find the way out before your flashlights die, and you’re lost in the darkness forever.

You’ll need to work together to overcome deadly subterranean hazards – stick together for safety, or split up to cover more ground. One wrong step could knock you unconscious, and your friends will need to stage a rescue. Light and hope are scarce. And worst of all, you don’t think you’re alone down here…

Sub Terra is a team-based push-your-luck game. Together, you'll decide what risks are worth taking and when. The caves is a dangerous place - no matter how well you plan, things WILL go wrong, and your survival depends on how well you react to unforeseen circumstances.

Your goal: Escape the cave before you run out of time.

Cavers: Everyone picks a caver, and gives that caver 3 health points. There are eight characters to choose from in Sub Terra - each has unique abilities that change how they play.

Tiles: Cavers begin the game on the START TILE. You're all trying to get to the EXIT TILE, which is near the bottom of the TILE STACK.

Actions: Every round, each caver has two action points to spend (and can risk a health point for a third) The basic actions are:

●   Reveal (Flip the top tile of the stack and place it a gap next to your current location);

●   Explore (Reveal a tile, then immediately Move onto it. Faster, but riskier!);

●   Heal (You or another caver on your tile regains one health point);

Together, you must place tiles as quickly as possible while not getting too spread out. Why not run off by yourself? Well…

Hazards: At the end of each round, resolve the top card of the HAZARD DECK. Each affects a certain type of tile: cavers on those tiles will lose health, and the tile may become harder to traverse. For example, GAS hurts cavers on GAS TILES a medium amount, whereas a FLOOD hurts those on WATER TILES only a little but makes the tile twice as costly to enter in the future.If you lose all your health points, you fall UNCONSCIOUS - you're unable to take further actions until another caver reaches your tile and HEALS you. If a friend is nearby, this won't take long. If you've strayed too far down a side passage, it might take some time to reach you. Why does that matter? Well…

RUNNING OUT OF Time: When the hazard deck runs out of cards, your flashlights are nearly out of power: instead of resolving a card, each caver has a chance of getting lost in the darkness forever. Turns are precious - time spent rescuing fallen cavers or backtracking through difficult passages is time you'd rather spend uncovering more tiles and getting closer to the exit.

Horrors: You're not alone down here. Some hazard cards can spawn...things...which will relentlessly hunt you down. If they catch you, you'll immediately lose all health points and fall unconscious. If you try to fight them, you will die. RUN.