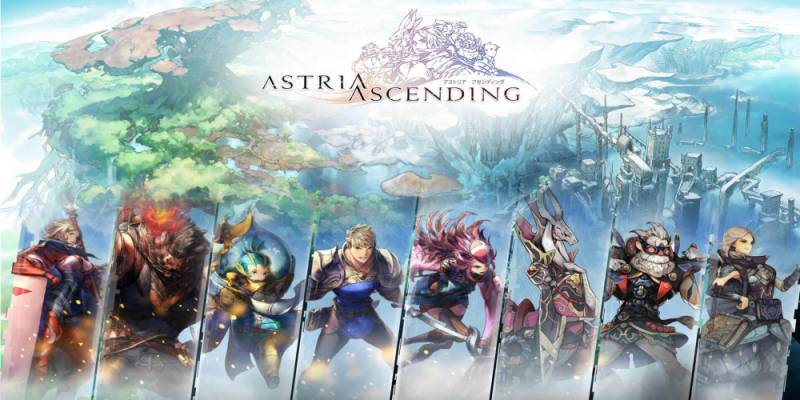 Astria Ascending is a Japanese RPG, which will take you to a fascinating world of adventure, battle, and magic spells.

The premise of JRPG Astria Ascending takes place in a magic world, where demigods are a daily reality. They are chosen to shield this fairy tale realm from all sorts of demonic, dark, and fiendish powers.

However, there’s a fatal catch: as soon as a “lucky citizen” gets appointed as one of the demigods, he or she has 3 years to live.

Once the time is up, they go kaput and there will be no one to preserve the subtle balance of good and evil. That’s when you enter the play.

You’ll be the leading commander of a party of 8. Every semi-divine buddy of yours has a story to tell, a sword to yield, or a magic spell to unleash.

The combat system is turn-based. That means, you need to strategically calculate the alignment of forces and know your enemies well — there are 200 types of those.

A major perk is that you can swap your party members easily, which helps in delivering a bitter defeat to the baddies.

What Astria truly shines at, though, are its ritzy and flush visuals. A jaw-dropping fact: the game is 100% hand-drawn. And while you traverse through its detail-rich valleys, forests, and magic ruins, you’ll notice a caboodle of beautiful subtleties.

Characters can’t complain about having zero charisma, either. A real star of the show is a half-beast and half-human named Dagmar — his unbreakable muscly body literally screams the word “Massacre”, when the enemy is near.

But he’s nothing if unaided by his pals: a nimble thief Arpajo, brave soldier Alek, charming summoner Alasia, and others. When working in unison, they are virtually undefeated. If under clever leadership.

Astria Ascending will hit the shelves on September 30. The game promises an immersive JRPPG gameplay and a lot of adventures.

Have you already preordered Astria? Do you think it’s going to be a worthy title in the genre? Share your opinion!