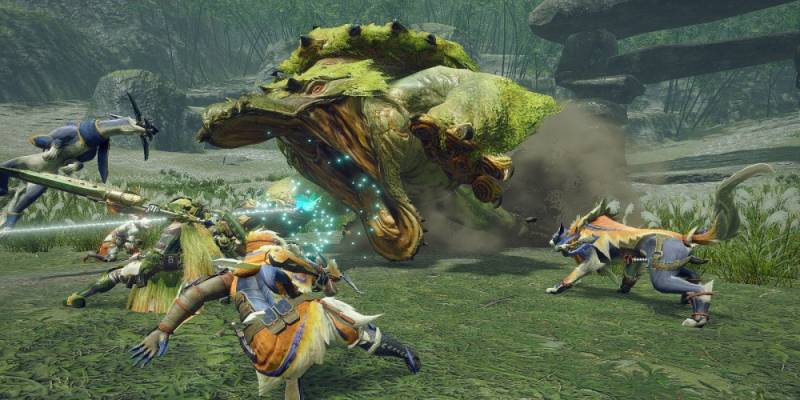 The team behind Monster Hunter Rise proceeds with its plan of crossover updates on Switch this Friday, 30th July, as Amaterasu (nicknamed Ammy), the canine Sun Goddess from the PS2 adventure game, is about to join the game as a Palamute costume.

Yes, you read that right. Amaterasu will appear in the gameplay via the ‘Ammy Costume,’ an armor set for your Palamute, the four-legged buddy that helps you in battles. You were able to kit your canine friends in the armor before, but the Amaterasu armor is an obvious visual upgrade. With the ‘Ammy Costume,’ Palamutes are sure to resemble the dearest Okami character. Furthermore, just like the star of Capcom’s original action-adventure title Okami, your Palamute will leave a flower trail in their wake as they move across the land.

As of today, Capcom doesn’t mention what exactly you will need to do to get the new layered gear set, but a little bird told us the whole format is going to be similar to June’s collab (when your task was to farm materials to complete an Event Quest). The new event quest will be infused in the game on July 30, 2021.

So, what are your thoughts on the third collab and the fact that very soon, Monster Hunter Rise enthusiasts will get the possibility of acquiring Amaterasu in the form of an unlockable layered armor set for their Palamutes? Have your say in the comment box below and get the discussion going. We value your opinion greatly.